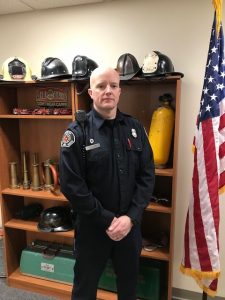 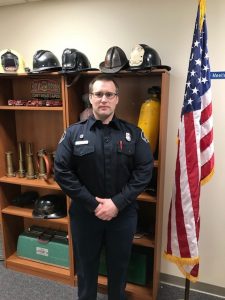 Congratulation to Firefighter/EMT Taylor Rain on successfully completing this probationary year with Chelan Fire and Rescue.

Help us welcome new Assistant Fire Chief of Volunteer Services Brandon Asher to the teams of Chelan Fire and Rescue(Chelan), Chelan County Fire Protection District 8 (Entiat) and Douglas County Fire Protection District 4 (Orondo). Assistant Chief Asher will be working with the three departments in the areas of Volunteer Firefighter Recruitment, Volunteer Firefighter Training and Volunteer Firefighter Retention. The three departments’ in 2016 applied for a four year regional FEMA SAFER Grant in the amount of $947,534.00 to hire this position and enhance our volunteer programs and volunteer recruitment efforts. Assistant Chief Asher started his career as a volunteer with Chelan County Fire Protection District 8 (Entiat) back in 1993 where his father serves as the Fire Chief. Assistant Chief Asher was first hired by Moses Lake Fire Department in 1998 where he spent five years as a Firefighter/EMT before moving on to the Arlington Fire department where he served 15 years working his way up the ranks to Fire Captain. We are happy to have Assistant Chief Asher join our team(s) and we are happy to bring some of our Federal Tax funds back into our communities to fund this program for the next four year said Fire Chief Tim Lemon.

On December 26, 2017 Chelan Fire and Rescue responded to Wheatland Lane in Union Valley for a residential structure fire. The reporting party was trapped in a back bedroom with his dog and was unable to self-exit the structure due to physical limitations. Chief 701, Rescue 71, Engines 73, 79, Tenders 71, 73, 74 with a total of 16 personnel responded along with two Chelan County Sheriff Deputies, an Ambulance for Lake Chelan EMS and a Chelan PUD unit.

The first units arrived in under 12 minutes and reported a working fire with flames visible. The two Chelan County Deputies rescued the occupant through a bedroom window as fire units were arriving and initiated a transitional fire attack, knocking down the outside fire then moving to the interior fire. The fire was brought under control within 24 minutes of arrival of the first fire engine. Damage was limited to a utility room, void space on the second floor behind a stub wall/attic space, the front of the structure and smoke heat and damage in the hallway and kitchen. Crews spent another 30 minutes overhauling the fire area to ensure all hot spots had been extinguished. Engine 79’s crew  provided fire watch for the next two hours after fire operations had been completed.

“This could have had a very bad out come if the home occupant had not smelled the smoke as he was getting ready to go to bed. The home occupant reported smelling smoke and when he opened his bedroom door the house was filled with smoke and the door felt hot. He closed his door and called 911 telling the dispatchers his location in the house and that he could not get out,” said Chief Lemon.

“The fire and rescue operation went very well,” said Chief Lemon. We had a strong response with everyone in the right spot, at the right time, doing the right thing. We had two of our Chelan County Deputies available in the area and able to respond and assist. Our initial response on-duty crew of four personnel were responding within minutes of being dispatched and our volunteer personnel from Satellite Station 73 in Union Valley had a strong response. “We had the best outcome we could have hoped for.” said Chief Lemon. The occupant and his dog were saved and the house can be repaired. 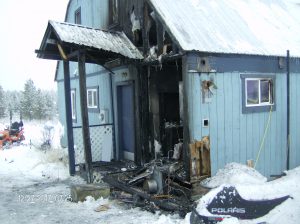 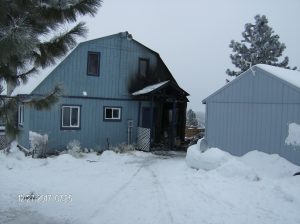 Quick Response by Chelan Fire and Rescue Firefighters stops what could have been a disastrous fire in the Grandview.

Chelan Fire and Rescue was dispatched to a report of smoke in a 3rd floor room of the Grandview by the Lake at around 6:47 p.m. The first units were on scene within 5 minutes of the 911 call and two and half minutes of being notified by the dispatch center. The engine connected into the Fire Department Connection (FDC) that supports the stand pipe and fire sprinkler system while other members of the crew accessed the 3rd floor room which they found to be charged with smoke and heat. The crew located a working fire in the void space around the bath tub and reported fire coming from the ceiling area in the unit below them. A second crew was sent in to the 2nd floor unit and found fire in the ceiling area above the bathroom. Both crews were able to knock the fire down and then check for extension. No fire sprinklers were activated due to the fire being in the void spaces and not in the living space of the rooms. The fire was confined to the two units, but a 4th floor unit suffered smoke damage and the 1st floor unit had some water damage. Guests in Building C and D were displaced for about an hour during fire operations.

“The fire could have been much worse if we had not had a strong initial response from our on-duty crew followed by aggressive firefighting,” said Fire Chief Lemon. “I credit them with keeping this fire from causing any further damage. During the initial fire operations we were using all available resources that were on the scene to include our EMS folks and the Grandview staff to help ensure the buildings were completely evacuated,” said Fire Chief Lemon. The fire is under investigation.

Please join Chelan Fire and Rescue in welcoming Firefighter/EMT Austin Murdock to our team. Austin will be filling a vacated SAFER Grant Firefighter position from earlier this year.

Austin grew up in Leavenworth and graduated from high school there in 2015. He started his Fire Service journey with Chelan County Fire District #3 as a volunteer, and worked the summer of 2015 in the Wenatchee River Ranger District. In the fall of 2015 he started attending Everett Community College where he obtained his AA in Fire Science. Austin is a certified EMT and completed his Firefighter I & II and HazMat Awareness and Operations at the State Fire Academy. Before joining the Chelan Fire and Rescue team, Austin worked as a part-time Firefighter/EMT with Mukilteo and Lake Stevens Fire Departments. Austin lives in Chelan with his significant other. When time allows, he enjoys being an outdoor enthusiast. Welcome to Chelan Fire and Rescue Austin.

Good job to all involved (CF&R, CCFPD 5, DCFPD 4), strong response (23 personnel) and firefighters were able to keep the fire from spreading to other structures and brush. This fire was in Chelan County Fire District 5 jurisdiction, but due to the seamless operation of the two districts and assistance from Orondo Fire Department the loss were limited to the building of origin.

Chief 702 established command and set up for a defensive operation and exposure protection for the apartments to the west after affirming no one was inside the building. Fire was contained to the building of origin and was a total loss to include all of its contents. The cause of the fire is still under investigation.

Chelan Fire and Rescue’s Leadership/Management team and fire department were recognized by the Washington State Fire Commissioner Association at their Fall Conference in Spokane October 28, 2017. Chelan Fire and Rescue participated in the “Management Excellence Award Program” in the Category B Class, against fire departments with budgets between $2,000,000 and $4,000,000 and received 1st place in the State of Washington. The purpose of the Management Excellence Award Program is to provide a means of sharing information, innovative ideas and the variety of activities taking place throughout the state of Washington; to give recognition to those in the fire service that have demonstrated progressive achievement; to benefit all fire districts, regardless of size, location, budget, or number of personnel.